Rudy and a Tail of Two Towns

“It was the best of times, it was the wurst…” Rudy looked thoughtful. “Yes, that’s right. It was pretty good all around.” 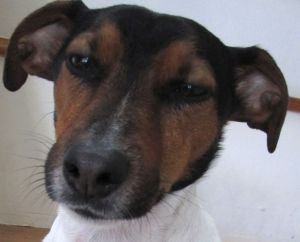 Not one to toss superlatives lightly, Rudy took a moment to fondly remember our first family getaway–a stay at The Red Lion Inn, in December. “Tanglewood, Shmanglewood, I’ll take the turnpike to Stockbridge and a night at the Red Lion any day,” he hummed softly, breaking in his new tennis ball. 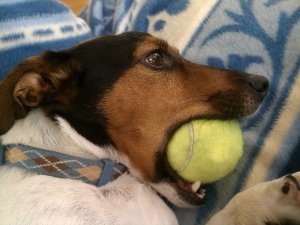 First you tenderize it.

But in fact, Rudy’s opening thought was addressed to our most recent outing, which included two nights at Robert and Carolyn’s Clover Hill Farm, a dog-friendly country inn in Williamstown, Massachusetts, where we were staying while checking out the Penguin Plunge in nearby North Bennington, Vermont.

The beamy wooden farmhouse spreads like a Colorado lodge across a hilltop, just outside the town proper. A long red barn sits behind, invisible until your car climbs the hill.

Rumor has it there are 18 horses inside, plus Molly (mule), Chelsea (miniature horse), Pumpkin (pony), and Susie (goat). The thought was too exciting to even consider going in.

“Whoa,” Rudy’s eyes bugged out. “I never dreamed it could be like this.”

At the house, Rudy was greeted by Bella and Snoopy, the on-staff beagles.

It all happened so fast…

Things were sniffed, limbs were flailed, and differences were worked out with a slide across several acres of polished wood floors.

“Double whoa,” Rudy’s highest praise. “And check out that kitchen. Five out of five bonies.”

The wall art was good,

and there were plenty of unexpected diversions:

and Adam, who likes to shower four or five times a day. 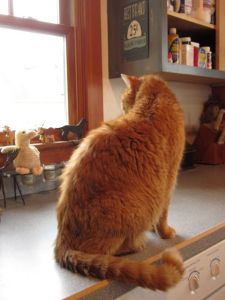 We’re embarrassed to say there was a Moment… 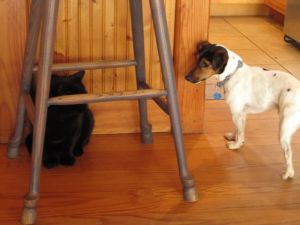 but we’re trying to put it behind us.

It’s true, there was an exciting (“Inciting,” he interrupts) collection of movie posters scattered around the house. Robert is a collector of ephemera, among other things. The posters, in particular, seemed to inspire some of Rudy’s more theatrical moments at Clover Hill Farm, although most of these movie memories didn’t even come from Robert’s collection.

Dr. Zhivago, in the field behind the house, 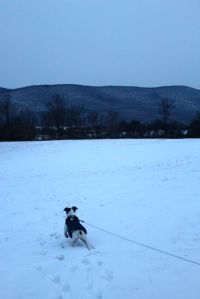 The snows that winter stretched to the horizon…

Fly Away Home, of course, with all the geese, ducks, and pigeons,

and Giant, although the “gold” in question was a steaming heap of manure, not oil,

…and the dung stretched to the skies…

but ultimately, I suspect it was the poster of Dances with Wolves that did him in: 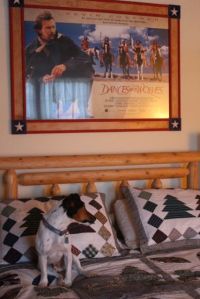 This is not the Wild West, Rudy was informed (by us). He accepted Carolyn’s generous distribution of peace treats (which made a stronger impression).

And he learned a thing or two about sharing.

In this indescribably warm and unpredictable B&B, we will be welcomed back with open arms, open mouths, and wagging tails.

It was the best of times.

13 Responses to Rudy and a Tail of Two Towns