Rudy Has a Bone to Pick

On a recent aimless weekend where the highlight was a 30-degree temperature differential, with the kind of resulting fog that would have tickled the dickens out of Dickens, Rudy went looking to bury a bone. 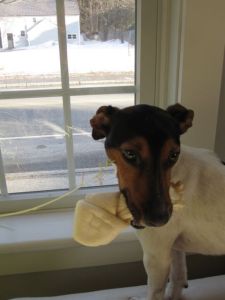 The rawhide bone in question is about the size of Rudy’s head. It was a Christmas present to him from a dear friend, and it’s been torturing him ever since, whenever he remembers he has it. “I can only go on instinct,” he maintains staunchly. “And all of mine are saying ‘bury the sucker’.” 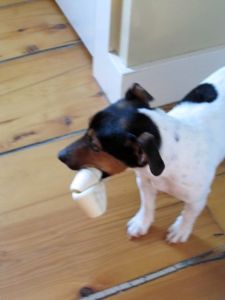 You said a mouthful.

This strongly worded declaration is a far remove from Rudy’s usual stoicism, but every now and then his inner dog asserts itself loud and clear. Most often, telephone poles and sewer drains are involved, along with the occasional dried french fry stuck to the sidewalk. All in all, though, there’s not a lot that ruffles him. 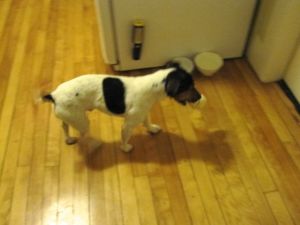 But this bone is really getting under his skin. And the ground, as they say, is frozen solid. 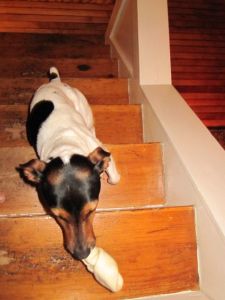 Maybe the back stairs?

And so, on the recent aimless weekend in question, when the dark rains and varying shades of gray were torturing the rest of us, I decided to follow Rudy around the house in his creative pursuit of an indoor hole in the ground. 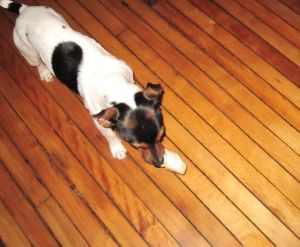 I was repeatedly impressed with the scope of his imagination. Locations ranged from tight quarters, 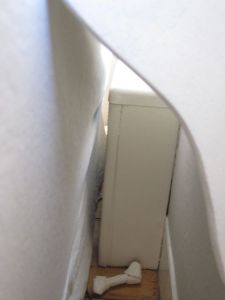 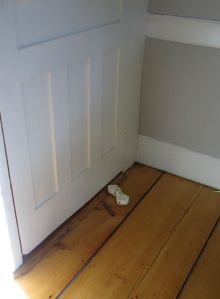 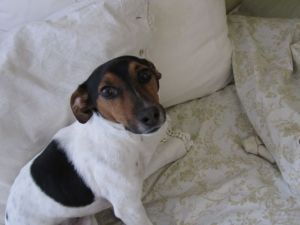 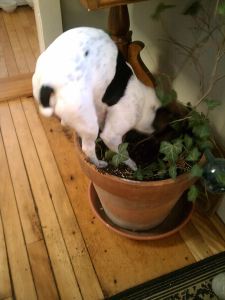 and oddly enough, by the time we had explored every possible nook and cranny in the house, I was in a better mood. I even laughed out loud a couple of times. 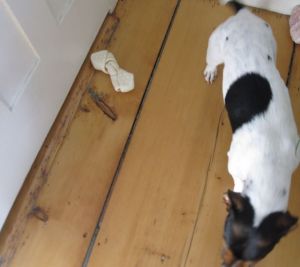 Come on, work with me…

Still, at the end of the day, you can tell it gnaws at him, the weight of this bone. 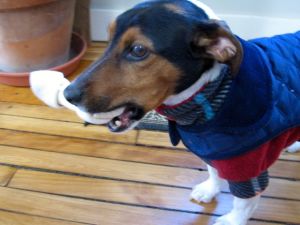 Hope, however, springs eternal in Rudy’s world—just as spring hopes eternally, and in a few months he will have fresh ground to dig, or else, by then, like all good bones, this one will have disappeared. 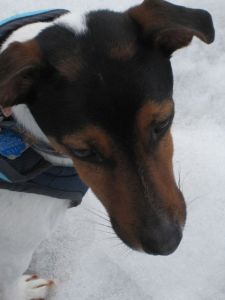 In the meantime, even though the ground is frozen, the snow is dirty, and the light is still too quickly gone, Rudy reminds me that pretty or not, 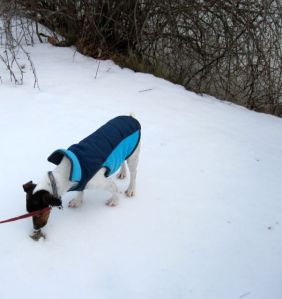 there’s always something good to smell.

This entry was posted in A Desk with a View. Bookmark the permalink.

22 Responses to Rudy Has a Bone to Pick