“Honestly, I don’t know what Italy has that we don’t,” Rudy remarked when I got back from Rome earlier this month. “You realize you’ve been gone the equivalent of…”

I spaced out while he did the math—7 over 1 times 12, multiplied by 2 meals minus 3 weeks—and then presented me with some number so high only dogs could hear it.

“Well for starters, there’s the Villa Doria Pamphili,” I said. “Four hundred acres that function like the lungs of Rome. I saw some of your people there.”

“Hmmm, let me see if I can paint a picture,” I said. “Not that I’m trying to convince you or anything, but there are some pretty great markets, like the daily one at Campo de Fiori.”

“I do like pigeons,” he said, zeroing in on the bird conspicuously catching some late-morning shade.

“And lots of outdoor cafes.”

He yawned and feigned disinterest.

“Granted, there are occasional hindrances,” I paused, thinking of the sign posted inside the Sant’Agnese in Agone church, in Piazza Navona.

“Not to worry,” I interrupted. “You’ve still got the rest of Piazza Navona to explore, and it’s huge.”

He was quiet for a moment.

On the Castel Sant Angelo’s Bridge of Angels

“Ah, i gatti,” I nodded. “Plenty of those, too. Some of my favorites are in the Trastevere neighborhood, along the Tiber.”

“You’d like the gelato,” I said, after a moment. 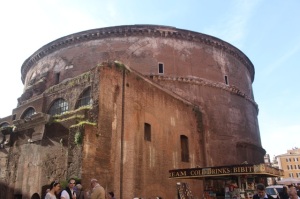 In the shadow of the Pantheon

He nodded. “I see they have cold drinks, too?”

He tried to look away.

“Do they have bacon?” he asked abruptly.

But in the end, it was the Dolce Vita attitude that really spoke to him. Rudy can be a little wired, as he’s the first to admit. 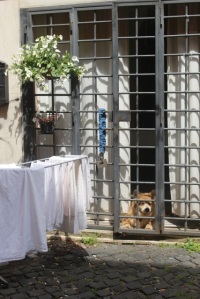 “I could use un po de relax,” he said, slipping into Italian slang. And in the end, he concede that Rome might have possibilities, and he’d put it on his bucket list.

“I thought you’d never come back to me,” he sighed. 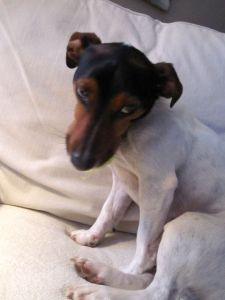 This entry was posted in A Desk with a View. Bookmark the permalink.