Sometime in these last weeks, Rudy has developed a taste for coffee.

It helps me think.

“It’s chewy, strong, with just a hint of maple syrup—exactly the way I like it,” he says.

“That’s bad, Rudy!” I said, the first time it happened.

“But it tastes so good,” he reasoned.

I mopped up the mess around the bed where I had brought a full cup to have with my early morning read. Half had ended up on the pillow; the other half, I assumed, was in Rudy. Since then, I’ve kept the morning cup closely guarded.

And all has seemed well.

I can barely get up…

Then, a few days ago, I left my desk to answer the phone. When I returned, my cup was empty and blats of coffee were spattered all over the desktop, stopping just short of my laptop.

Rudy yawned, surprising since he had just consumed the equivalent of a half bathtub of caffeine, relative to his size.

Am I boring you??

He hadn’t been caught in the act, of course, but there was major circumstantial evidence. As before, I followed PC protocol—scold the behavior, not the perp. And I spoke softly, albeit firmly. His eyes got wide, the whites showed a little, and then his lip trembled. 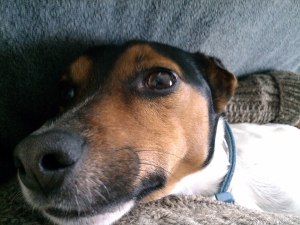 I rolled my eyes.

“If you’re going to drink coffee, you could at least put in some of the hard work,” I said heartlessly. “Like the next time the blog is due, be a little proactive.”

“Blah, blah, blah, put it into your own words”–that’s generally the extent of Rudy’s help. Then he rechecks his dog bowl for the bazillionth time and falls asleep with his head on the ball. 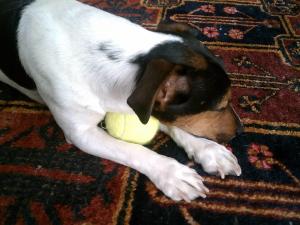 “You’re the English major. You’re the so-called ‘freelance writer.’ You’re the one with the business cards,” I’ve heard him grumble when he doesn’t think I’m listening.

It’s hard when he’s right, but there it is.

I’ll probably continue to share when I least expect it.

I dream of coffee…

This entry was posted in A Desk with a View, Rudy* and tagged Rudy. Bookmark the permalink.